As we have indicated in the advertising and branding pages of this website, night glows are an incredibly important tool in getting your brand across to thousands of people.

Everytime a balloon fiesta is organised anywhere in the world they always include a night glow.  These glows attract large public attendance and really are a magical experience.

Visit YouTube to see recent footage of the famous nightglows at the Bristol International Fiesta.  There are a couple of links below.  The glows take place on the Thursday and Saturday nights at the fiesta and are choreographed, mixed and cut by Ian Martin of Flying Enterprises, who has achieved world wide acclaim and awards for these spectacular night glows.

Ian says, “The music choice is so important, we want the public to go away, singing or humming the tunes and if they enjoy the whole experience, they will also remember the balloons they saw glowing.  At Bristol we now use a full concert sound system and we link the music all the way through the build up, the glow and then into the firework display”.

The two events attracting over 250,000 people and are subsequently viewed by thousands on social media and local, national and international TV.  We also carried out a spectacular nightglow in Belfast in 2015 in conjunction with the Tall Ships and Balloons Event, we also organised a balloon tether at Stormont.  The glow took place at the Titanic Quarter and was watched by huge crowds.

The Belfast event as seen by one of our partners at the event Flying Media, including a bit of the nightglow.

The links below will show you the last 25 minutes of the Saturday Glow 2010 and 2011 plenty more entries are available on YouTube. You can also see the article produced by HTV showing how the glows are put together.  This video is on our PR & Media page.  PR & Media

It is not just Bristol where nightglows are popular, most balloon events put on nightglows as they are very popular with the public and media along with the mass launches of course.

Main sponsor at the night glow

Night glow by a lake in Holland 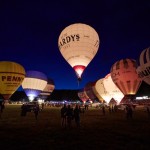